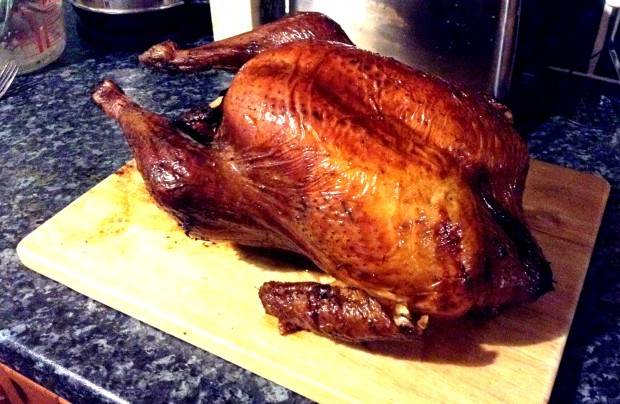 The last few years I’ve had a nightmare time with turkey. Every Thanksgiving something goes wrong; the turkey cooks too fast, too slow, the legs are bloody but the breast is dry. Ugh. This year I decided to try something a bit different: dry brining.

Now apparently this terminology isn’t correct and gets under people’s skin. A brine is a wet mixture of salt and liquid, so this might be better described as a salt rub. You make a mixture of maple syrup (or brown sugar), salt, crushed red pepper flakes, thyme, fennel seeds and star anise − it smells amazing. You rub it all over the turkey and let it sit overnight in the fridge uncovered − and if you can leave it for a day or two more all the better. 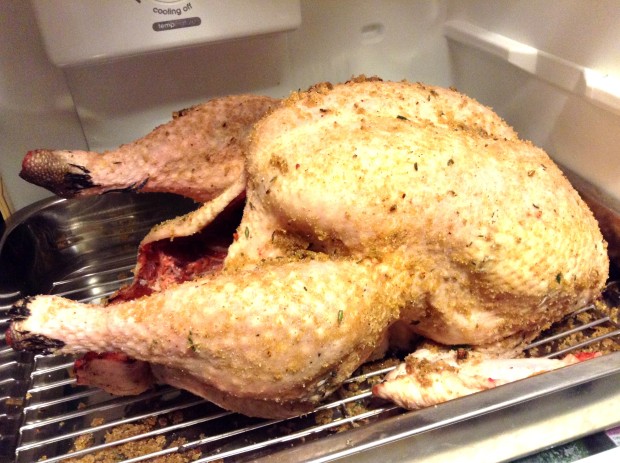 Apparently, the mixture works via osmosis, drawing the liquid out of the meat and then reabsorbing it making the meat even more moist than it would normally be. The rub worked so well on my turkey that there weren’t even any juices in the bottom of the pan at the end of the 24 hours.

Although there is lots of conflicting information on the internet, I decided not to rinse the rub off before roasting. Now, you may be worrying that all the salt absorbed into the meat would make it inedible. It won’t. The meat was perfectly seasoned, although the skin was ever so slightly salty. I think the skin was over salted not because I didn’t rinse the meat before roasting − which would also mean the skin wouldn’t brown as beautifully as it did − but because the recipe calls for just a bit too much salt. I didn’t read enough before making the rub, so I now realize that a 1/2 cup of salt for an 11lb bird is probably a bit excessive. Usually recipes go for a 1/3 cup salt for a 14-16lb bird, or a ratio of about 2/3 teaspoon per pound of meat.

Despite my planning ahead, I still had a bit of a hiccup this year − what holiday meal would be complete without a bit of stress? The bird was cooked 45 minutes earlier than I had planned which meant that it rested for over an hour before I carved and served. I was afraid the breast would go dry, the meat would be cold, etc, etc. Even though it rested for probably close to 45 minutes longer than I had planned, it was hot, it was moist, it was beautiful. I was thrilled! The salt rub ensured that the meat retained its moisture and was very forgiving despite sitting around for ages before we ate.

I will be using this method in the future, definitely. And I think I’ll try it with other types of meat as well. It imparts a subtle flavor to the meat and the list of flavor combinations you can use is endless. It takes a bit of planning ahead, but besides that it couldn’t be easier. So try it out this holiday season, I think you’ll find that you’ve made the best bird in town.

1. Rub salt mixture all over turkey and set on a rack in a roasting pan uncovered in the fridge for 12-48 hours.

3. Pour out any juices from the bottom of the pan and place turkey back in pan on rack. Baste with maple syrup butter mixture, add 1-2 cups water or stock to bottom of roasting pan and roast for 1 hour.

4. Baste turkey with remaining maple syrup butter mixture, add more liquid to the bottom of the pan if needed to keep dripping s from burning and roast for an additional 45 minutes. Cover any overly brown bits with foil.

5. Add more liquid to bottom of pan if needed, turn pan around and roast for a final 45 minutes or until thermometer reads 170°F when inserted between leg and breast, not touching the bone.