Some of our close friends had family visiting from Poland last week and, as ever, I looked at that as the opportunity for a dinner party. Dinner parties seem to have this stigma, this pretentious air about them which puts people off. In our house they are simply an excuse to have good friends over, drink lots of wine and, of course, for me to get in the kitchen and cook up a three course meal.

It’s exciting from the start – putting the menu together, shopping for the ingredients, preparing what I can in advance – it usually ends up being a few days of activity, all of which culminates in sitting down at the dinner table with (hopefully) delicious food and people I love.

This was no different and the main course was chosen for me by a bargain find of a shoulder of pork. I asked for some inspiration on Twitter and got some good suggestions which I will definitely be trying when the weather gets warmer – keep your eyes open or pulled pork with fennel slaw! – but none really hit on what I was after for this meal.

In the end, I decided to go with an Italian classic – fennel seeds, chilli flakes and garlic. I scored the skin of the pork and, after toasting the fennel seeds in a dry pan and bashing everything up together in a pestle and mortar, I rubbed the mixture into the scores. Then I loosely covered it with greaseproof paper and refrigerated overnight. The original recipe says to remove the skin, but I love crackling and couldn’t imagine wasting what can become something so beautiful. Having made it, I can see why they suggest it because there is a significant amount of fat under the skin which doesn’t get crispy and there are people who find this off putting – obviously, I’m not one of them. If you’re trying to impress or want to be a considerate host, you can remove the skin and make the crackling separately.

I roasted the pork in a low oven for about three hours after an initial 30 minute blast of heat to kick off the cooking. It came out pretty moist, although not as moist as I expected, but served with pan juices and homemade apple and pear sauce it was lovely.

As an accompaniment, I decided to use a great British vegetable which can often be overlooked: celeriac (or celery root in the US). It is, as the name implies, a type of celery grown for it’s edible root which is used throughout Europe, perhaps most notably in rémoulade. It has a celery taste to it and matches well with pork and apples, so it was perfect for this! I used a whole bulb of celeriac along with the equivalent of a large potato (about four or five small ones). The celeriac needs a bit more cooking, so add the potatoes in after it’s been boiling away for a bit. I mashed it with salt, white pepper, butter and thick cream.

My second side was a simple green bean dish with breadcrumbs and toasted pinenuts from the Two Greedy Italians cookbook which I can highly recommend – and as someone who, on the whole, finds Italian food a little underwhelming, that’s saying something. You cook the beans as normal, toss in butter and serve with toasted breadcrumbs and pinenuts sprinkled over the top. Apparently they have a similar dish in Poland (minus the pinenuts), so these went down a treat! 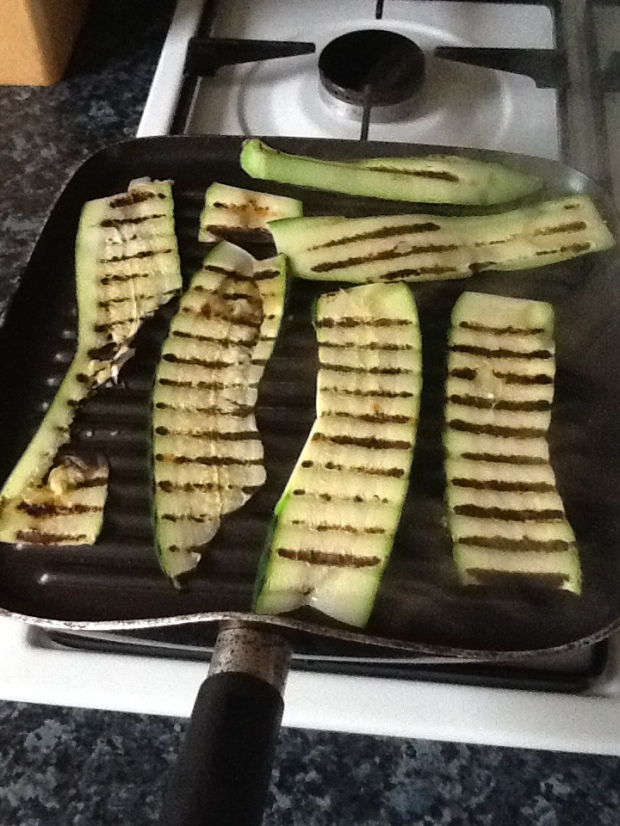 My starter also came from the Greedy Italian duo and is a huge hit every time without fail. It’s minted zucchini crostini and it is so simple, but the combination of flavors is surprisingly savory. You thinly slice a large zucchini (courgette) and either grill or cook in the oven until just soft. Then marinate it in garlic, mint, olive oil, white wine vinegar and salt and pepper. The longer it sits in that jacuzzi of bliss, the better. I always serve it room temperature, after a good session of marinating, on oiled, toasted bread.

For dessert was a lemon cheesecake with mixed berry coulis – a little less Italian, I know. I could have used mascarpone and lemons from the sun drenched Amalfi coast, but I’m afraid it was British all the way. I don’t typically like baked cheesecake, but the recipe in my December 2012 Olive magazine has converted me. It is basically a plain cheesecake batter (two eggs, 600g soft cheese, 150ml sour cream, 250g sugar) with berry coulis rippled through it, so you can pretty much make it any flavor you can conceive of. For this particular meal, I thought lemon would be a refreshing finale. I tried to ripple some lemon curd over the top, but it all sunk in. So lemon curd, lemon zest and the juice of a lemon were my additions and the result was sweet, but not too sweet, and deliciously lemony. It was surprisingly light for a cheesecake as well. (As an aside: the recipe calls for sour cream, but last time I didn’t have any and used whipping cream instead and this time I used natural yogurt. Both times it came out exactly the same.)

The point of this dinner was not groundbreaking gastronomy, but I think everyone found the food good and the company even better. The company was so good, in fact, that I didn’t even get a snapshot of the beautiful finished joint of pork, or the celeriac mash, or the green beans, or the crostini or the cheesecake…too busy having fun, I guess. So while this may be a crap recipe post, it was an excellent dinner party even if there are no pictures to prove it, none of the food at least…